“DO GIAONG” – THE FREEDOM TO EDUCATE ONESELF 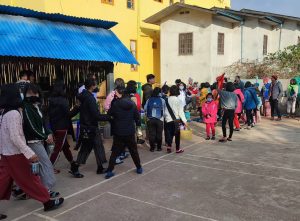 Thursday 3 February 2022 was a big day for hundreds of children in Taunggyi: a primary school for displaced children aged between 6 and 18 was inaugurated!

The recent political crisis in Myanmar, besides creating a climate of insecurity, is exacerbating the poverty of the entire population. The protests have now turned into a real civil war, with government troops on one side and resistance groups organised by the population on the other.

In the city of Taunggyi, where New Humanity works, thousands of displaced people arrive every day.

Moreover, throughout Myanmar, schools have now been closed for two years and the children of the displaced people do not even have a school to go back to.

This is why New Humanity has started a new project to open a primary school in the town of Taunggyi for displaced children of different ages, from 6 to 18. 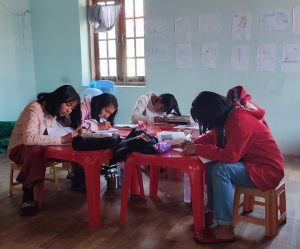 The children chose the name of the school: “Do Giaong“, which means “Our School” in Burmese. A school they wanted, built together with their parents, a hymn to the freedom of education. The school will have 179 students and will be organised in two structures: 112 displaced children will be housed in the “House of Dreams” structure managed directly by New Humanity, the remaining 67 will be housed in the Infant Jesus Convent centre, run by the Sisters of Providence. 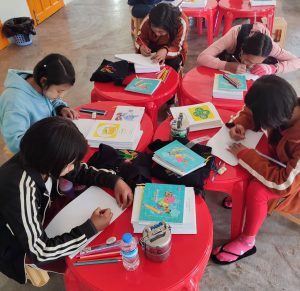 The students will be divided into 10 classes according to age, from grade 1 to grade 10. They will be able to attend courses in Burmese language, English language, mathematics and participate in laboratories held by a psychologist: one hour a week of “creative workshop” and one hour a week of “narrative” and shared reading.

The teaching team is made up of 10 people: they are already trained teachers, mostly displaced women.

New Humanity has also already purchased 120 tables and 160 plastic chairs to equip the classrooms and provided each child with a kit of two uniforms.

The “Do Giaong” school is a very special place to meet new friends, to grow, to improve oneself and to learn something more every day. There is a lot of enthusiasm among the children so we can only hope all goes well!

Good luck to all the children of the “Do Giaong” School!

If you want to know more about the project click here 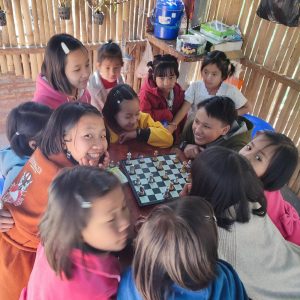