SACHIN WALKING ON HIS OWN! 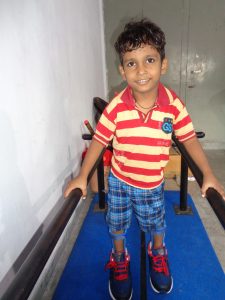 Sachin lives in Jawahar Nagar slum and when we found him in 2019 he couldn’t even sit alone or grab objects, thanks to our Navchetan program he can now walk on his own and he has a lot of new friends!

Sachin was born as the firstborn child of Mr.Kishan and Suguna devi on 22.05.2014. They live in Jawahar Nagar Slum. The birth of Sachin was through a normal delivery at a hospital. His mother had aborted the first child and for Sachin she did not have pain so she was injected to get contractions and deliver. But when the child was born there was no birth cry for about two hours. So he was shifted to the pediatric hospital for three days. After that he was given breast feeding for three years. At the age of 2 years his parents realized that the child was not achieving the natural developmental milestones. So they took him to goddesses after goddesses to do worship and superstitious practices. But nothing worked out. They then took him to hospital and began treatment. But even after six months since there was no improvement they gave it up. They believed that someone has done sorcery to the child. 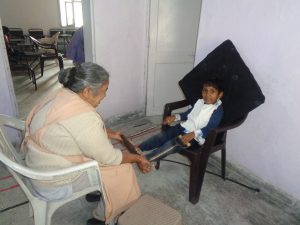 Sachin was found through the survey and was registered at Navchetan on 16.10.2019.  At that time Sachin was not even able to sit balancing himself. He was diagnosed as Ceribral palsy case with Spastic type. He used to fall and hurt his head often. Therefore he developed walking on knees.

He was given physiotherapy to concentrate and to balance. His parents were not so serious to do the exercises at home. He also was very playful and not interested in doing physiotherapy. But he was regular to the center. Last year he was trying to hold and walk but was falling down very often so a helmet was given to him to wear so that he does not hurt his head.  During the first year his mother had to carry and bring him to the center. But now he is 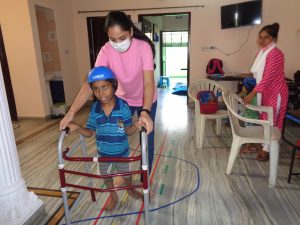 able to walk holding the hands of another person. He was not able to do anything by himself including consuming food and water.

After three years continuous efforts and the new methods of the present Physiotherapist, this year he began to balance himself on his own. He was given KFO to wear at home and another to use at the centre.

He was given lot of attention and encouragement to walk on his own. He was also taken to the neurologist, who gave him tablets to energize and relax muscles and to improve the general health. Thus after great amount of PT and moral support he began to balance himself with his physiotherapist walking behind him. 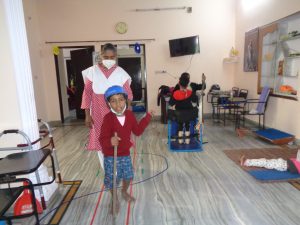 It was a day of great joy for him and for all of us. He wanted the physiotherapist to go home and make his parents to see that he is walking. But the problem was his father goes for work and come back only at night.  Anyway we accompanied him home and showed his mother and aunt that he is able to walk. They were also very happy. Since at home he is not careful to wear the KFO and few days of holidays he again lost his balance. But now once again he began to make improvement and is trying to walk.

At present Sachin is a hero who is able to eat his food drink his water, dress and undress, comb and make up, toileting and cleaning, opening peanuts, peeling onions, cooked 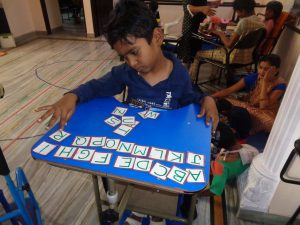 potatos, writing and reading alphabets and two letter words. Numeric he knows up to 50 to write and say. Adding is easy for him compared to deductions. He can communicate but he has got a thick tongue so clarity is less.

He is a jolly boy, loves to be in the park play a lot outdoor, enjoy friends and sing songs and love to dance. He is very choosy with food but enjoys fast food. Now he is able to walk slowly if he knows that someone is there at his back, because his anti-gravity muscles does not work and  the calf muscles are spastic therefore he is prone to walk on tow and his heals does not touch the ground.

So this is our Sachin. He loves his name because of the great Cricket player- Sachin Tendulker, and he too loves to play cricket but the bat he is unable to hold tight. He keeps talking and entertaining although during Physiotherapy and even in the vehicle while going and coming. 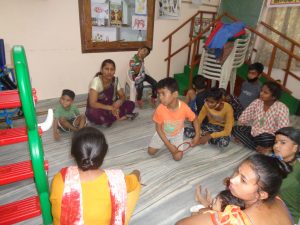 Thanks to our Physiotherapist Dr.Lavina who takes a lot of effort to see that the children benefit the maximum from the program.

Thanks especially to all those who are supporting our program, you are our strength and it’s because of you that we can be witnesses opf all these miracles!

Here we share a short video of his great achievement, so thrilling!