SHUBHAM: FROM DISGRACE TO RESOURCE FOR HIS FAMILY!

This is the story of Shubham: our Navchetan program completely changed his life and opened new horizons in less than three years, now his family no further looks at him as a disgrace, but as a resource! 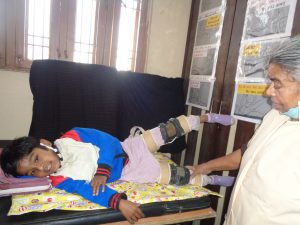 Shubham was born in 2012, in the slum of Jawahar Nagar in Jaipur, India. They named him Shubham meaning good luck. Being the first child, the mother was too young and uneducated, she didn’t know what care need to be taken during pregnancy. She even had a fall from a staircase while she was 8 months pregnant. After a difficult birth he weighed 1.5kg. He had a late birth cry. He had difficulties in nutrition during his first months. He was 6 months old and they took him to the doctor, who told them that their son was mentally and physically challenged and he would not be able to walk or talk. It was a thunderbolt in the heart of his parents, seen as a disgrace. 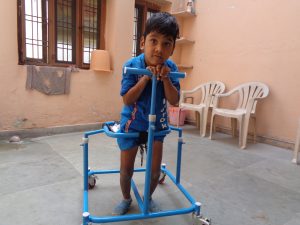 When our Navchetan’s staff first met him, in January 2018, Shubham was just like a vegetable person, and was dependant for everything on his mother.  He was 6 years old but could not sit up or open his fists and hold anything and he could look only to a fixed position and was lying down with crossed legs and hands.

After a first assessment, our physiotherapist communicated to his parents that he could improve in his movements and bring change in his life. The mother was very interested and supportive of her son, she brought him regularly to the centre and gave sufficient time for exercises at home amidst her household chores with his other two younger siblings. 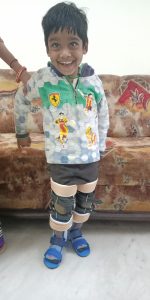 Today, after less than three years, Shubam is able to do all his personal needs (ADL chores) by himself. He gets down from the bed. Take paste and brush his teeth, wash face, comb his hair looking into the mirror. He is now able to sit without support, stand up with support, identify persons with their name, identify colour, hold the cup and drink and pick up small things, hold pencil and write alphabets and numbers. He is able to move by himself by riding baby cycle or kneeling without support. He is able to climb the stairs with support.  He is now trying to stand with support.  He was given assistive aids like Knee brace and KFO, CP chair and water sipping cups.

Thanks to Navchetan’s staff he got all his documents ready including disability certificate and now he is getting a pension.

He and his mother have great hope for his future. He always assures his mother that he will take care of her.

Moreover, his mother now also works at our centre as attendee, helping with children transportation and food preparation.

Therefore, the meeting with Navchetan completely transformed family’s perception of Shubham’s disability and made true the promise of his name, “good luck”: until three years ago he was a disgrace for his family, now he is a great resource!