THE STORY OF NAMAN FROM JAIPUR SLUM

After telling different stories from Myanmar, now it’s India time: we asked our staff in Jaipur to tell us the story of Naman, a boy who is taking part into Navchetan Community Based Rehabilitation program. Here is his story! 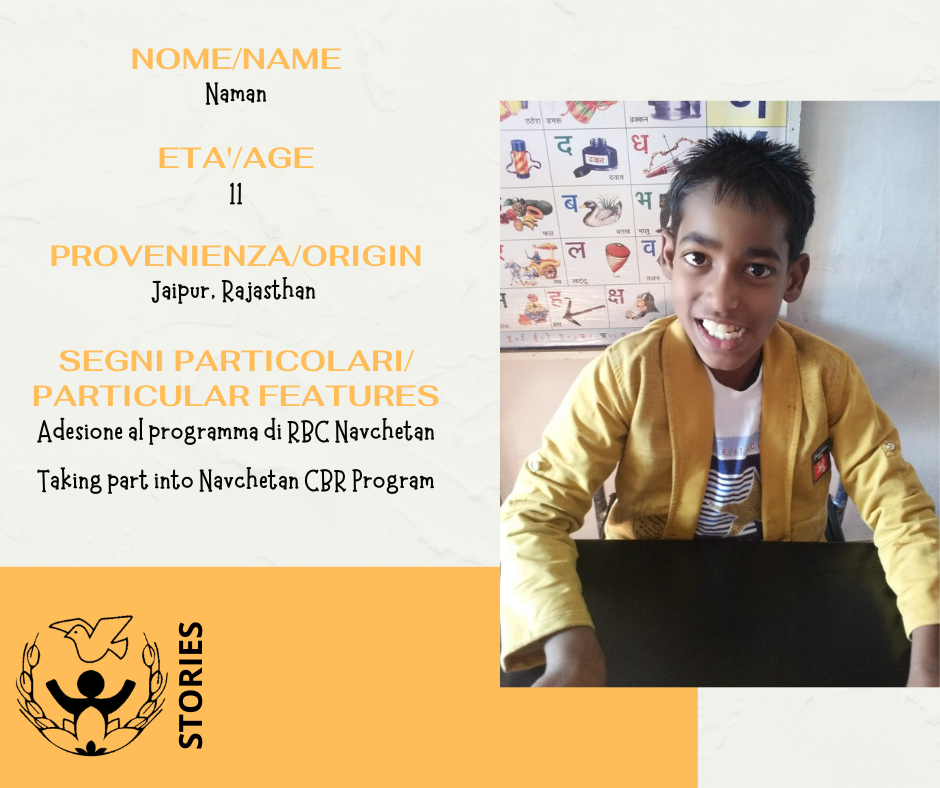 “Naman is a 11 year old boy, first among the three children of Mr.Radheshyam and Mrs.Bimala. He was born on 27.05.2009 at Jawaharnagar slum Jaipur, Rajasthan and they named him Naman meaning ‘Greetings’. Being the first pregnancy, the mother was given good care and all checkups were done on time and she had a full term pregnancy and a normal delivery at Government hospital Jaipur.  But as he was born he had very law pulse rate and so he was kept in incubator for 7 days and only on 8th day he was given to his mother for feeding. The child would not drink sufficiently and was feeling breathless so the mother fed him with breast milk through the spoon.  By the time he was 6 months baby he was not crossing the milestones and so he was taken to hospital and at 18 months CT scan was done for him. The doctor diagnosed him to have Cerebral Palsy (CP) with 40% mental retardation. They followed the instructions of the doctor for 6 months and then left everything and went after superstitions and some religious rituals for his healing. But seeing no improvement they gave up everything.

The mother slowly tried to enquire about the history of his father’s family and came to know that two of his father’s uncles were having such problems. She also observed that Naman’s first cousin Sachin has the same problem. The girl children instead don’t show this, so it seems to be a genetically transmitted disability especially to the boys who are born whithin the family.

Naman was 8 year old, when we found him during the survey in the year 2018. We suggested the parents to bring him to the centre for physiotherapy, but they were not willing because he was now growing tall, the mother could not carry him and he could not walk without someone holding his hands. After many visits to the family, they began to bring him to the centre. When he came he was a fully other dependent child, unable to balance himself on feet. He had totally uncoordinated movements of hands and legs. He used to fall frequently and was not able to walk without support.

The physiotherapy treatment and of fine motor and gross motor activities at the centre brought in him drastic improvement and confidence to the possibility of walking without support; he is now able to manage his life and also has improved in his communication skill and good manners. Indeed, he is now able to drink water from a cup, eat food with spoon, write alphabets and numbers, climb and get down the staircase with the support of the rail. He does activities of daily life like having bath, combing the hair, brush teeth etc. He wears his sandals and removes it and keep on the rack. He learned to kick the ball, wash the dish, clean the room with a broom etc.

We helped him with some burocratic matters, too. He’s got his Aadhaar card, the disability certificate and his name was included as disabled in the family card. Last, we applied for disability pension, and from 2019 he is receiving Rs.750 per month as disability pension from the government.

He has two younger sisters who love him and care for him. He also loves his parents and siblings. Now we are preparing him to join in a nearby government school who permits him to attend physiotherapy and special education at Navchetan as well.”

So good luck Naman! It seems that your improvements are quite outstanding and we can’t wait forward to seeing you at government school with your mates!