This is the story of Ronak: a child suffering from a form of disability who, thanks to our Navchetan centre and the support and therapy received from our rehabilitation workers, has seen his life change. 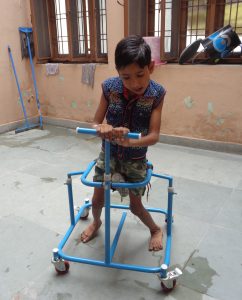 His mother gave birth to him in the government hospital. She had a difficult birth with him because some complications occurred during delivery: the child had to be delivered using forceps. Furthermore, he didn’t cry at birth but looked like as he was not alive so the doctors decided to have him hospitalized in an intensive care unit for 15 days. While being there, he started having fits. The doctors did not give the child any hope to survive but Ronak managed to survive and after fifteen days he was given back to his mother.

After six months since its birth, his parents began to notice that Ronak did not behave as an ordinary child, he would not sit or stand, so they decided to consult a pediatrician and, together with him, they started working on his recovery.

During his growth, Ronak’s parents repeatedly took him to the doctor for further checkups and they discovered the child was suffering from Cerebral Palsy and that he had a medically recognized degree of disability of 90%. 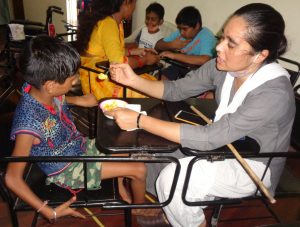 Ronak is a clever boy but he cannot speak or hold himself up without support. He cannot even eat or drink by himself but he needs to be fed.

When he arrived to Navchetan center he did not want to be separated from his mother. He used to cry a lot so in order to make him stop crying his mother had to sit next to him. But, after some time, he began to sit without his mother and, thanks to the treatment program, Ronak started to kneel, hold and climb on a chair, he started extending his legs and supporting himself with his forearms. 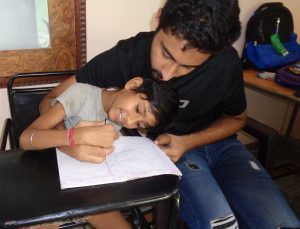 During the Covid-19 situation he was shifted from the slum of Jaipur to another district. In April 2021 Ronak came back to the slum and he declared that he was very happy to be back to the Centre. His mother Babli told us that in the meanwhile he had become very sociable and that he had learnt to eat or to hold a pencil by himself. He tried and still tries his best to do coloring and to write numbers but his involuntary movements make those actions very difficult to be made. He also learnt how to manage the smartphone and he learnt by heart his parents’ telephone numbers. He is able to understand everything and to follow the instructions.

In November 2021 the physiotherapist suggested the use of KFO to Ronak in order to strengthen his muscles. Thanks to that tool he can now move by himself.

Ronak is a teenager now and he is very competitive. He loves doing any challenging task and any little appreciation makes him feel as if he were at the top of the world. He does not want to stay at home even just for a single day because he loves coming to the Centre every day. He likes playing outdoor games and dancing.

His parents and brother are very happy about his improvements and they hope one day he will become able to manage his own personal needs without depending on someone else. 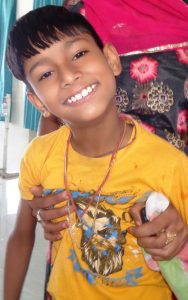 If you want to know more about the project, you can find the details here