This is the story of Maung Htoo: an 18-year-old boy with TEV who thanks to New Humanity has been able to live a dignified life and find an employment for his future.

Maung Htoo is an 18-year-old boy suffering from a congenital malformation: clubfoot. His family consists of five people: three brothers (one older and two younger), his father and Maung. They come from Ban Kan village, Kong Lon Village Tract in Taunggyi township.

Before 2018, their life was very simple: Maung used to help his mother with household chores and to take care of his younger siblings, while his older brother used to work as a casual laborer. His father worked in a forest far away and therefore used to spend a short time with his children, few days a year. Maung is the only disabled child in his family.

New Humanity Foundation helped them a lot: it provided them with food (rice, oil) and other necessities such as education and clothes. Maung’s mother has always been very grateful to New Humanity and grateful to receive assistance from them as her family did not receive a regular income and had to struggle so much to make a decent living.

Maung’s mother passed away at the end of 2018 due to breast cancer and the whole family suffered a lot because of her absence. His father became an alcoholic and was no longer able to take care of his children. The older brother moved to the border area of Thailand to work as a migrant worker and earn some money for the family. Moreover, at the age of 4, Maung’s younger brother had to face a psychological trauma because his mother passed away before his eyes.

After his mother’s death, Maung could no longer do the household chores and simultaneously take care of 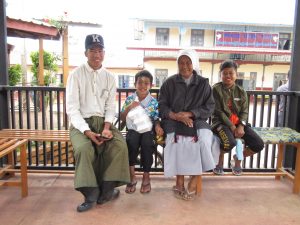 his siblings and their education. In 2019, New Humanity rushed to their aid by providing them with education, clothes, money to pay their hostel fees and much more. All the siblings were taken to Brother Felice Orphanage (in Nyaung Shwe Township) to improve their education. After a few months, the youngest was transferred to Phayar Phyu Orphanage (Taunggyi) because he needed special care from a psychologist to overcome his trauma. Despite the distance, they often visit each other and are all very happy to reside in a safe and peaceful environment. They said that they cannot imagine what their lives would have been like if they had stayed in their village. Their father visits them once or twice a year.

Since February 2020, due to Covid-19 situation, schools have been closed and neither Maung nor his siblings can continue their studies. They are forced to stay in the hostel and study on their own, sometimes with the help of older friends. Maung is now 18 years old and has been out of school for two years. Maung said that he would like to do some vocational training in his future. 3 months ago New Humanity gave him the opportunity to do some training in motorbike repair and Maung is still learning. He feels very grateful for this opportunity and he thanks New Humanity for all the support they gave him. He believes his mother would be very happy to see the progress he has made in his life. His dream, which is now coming true, is that of coming back to his village and open a motorbike repair shop… we can’t wait to see it coming true!