URMILA, A STORY OF WOMEN EMPOWERMENT 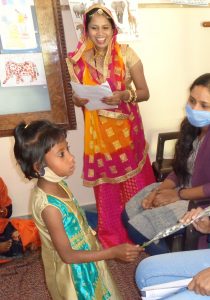 To celebrate the international day against violence on women we want to share with Urmila’s story, a story of strength and empowerment, a big example of women’s emancipation, coming from a slum in Jaipur where she works with our Navchetan’s children with disabilities.

We met Urmila in 2019 as she came for an interview for a Community Based Rehabilitator at our Navchetan program in Jaipur, India.

Urmila had 2 children less than 5 years old and she lived with them in the slum of Jawahar Nagar, close to her husband’s family. Her husband’s family is very conservative and they didn’t allowed her to go out from the slum, neither to work … “such a bad mom, who would look after the children then?”, these where some of the comments they made to her when she shared her thoughts.

THE COURAGE OF A CHOICE 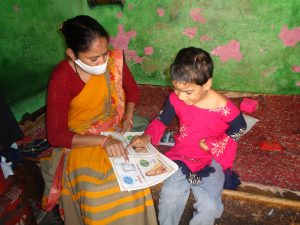 One day, in June 2019, she got the courage and went secretly to the interview, our staff met her and she confessed that honestly she had never worked and she never had met a person with disability before. For these reasons other people have been selected for this job, but those people then showed they had some prejudices related to people with disabilities, considering them of an inferior caste (unfortunately in India, especially in slums, there still are some division in castes). In september 2019 Urmila got a call from Lavina, our coordinator, who proposed her to go for a trial. Urmila was very excited about, but at the same time very worried for 2 main reasons: she didn’t know if she was going to be able to approach people with disabilities and, the most worrying, was the chance to be discovered by her husband’s family … she would have had to work with families from her slum, it’s a big slum, that’s true, but people are talking and they would have known eventually… 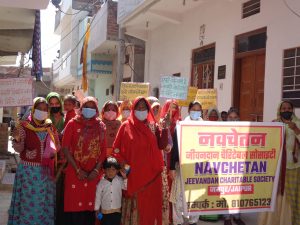 THE BEGINNING OF A NEW ADVENTURE

In that way the new adventure of Urmila with Navchetan began. She was a bit worried but also enthusiastic about this new challenge for her. She started to go around with our staff visiting families of children with disabilities in the slum and immediately it was evident how loving and caring she was with them, without any prejudice. She got immediately employed and supported for the first few months in order to train her about disability and to show her how to support families in defending their rights, even accompanying them in different offices or hospitals in the city.

The first she has been in hospitals or at the big center of Mahaveer she was terrified thinking that she should later bring families there and support them in these chaotic places, but then, step by step, she got confident and she became the referent for families, slowly they started to address always to her for everything related to disability and she felt recognized and valued in her work. 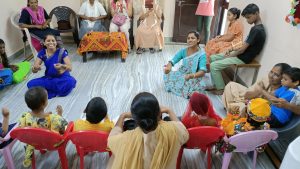 PROBLEMS WITH THE HUSBAND AND HIS FAMILY

What she was fearing then finally happened, her husband’s family discovered that she started to work. Her husband got furious and they had really scary fights, relatives couldn’t stand the shame of having a “working mom” among them. Nevertheless Urmila, after starting to work for defending children’s rights, had understood that she also had rights, and she discovered she wanted to fight to see her own rights recognized, too. 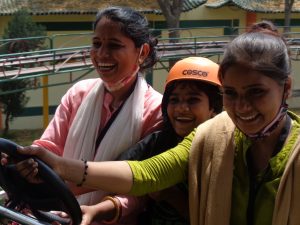 Consequently she kept on working for Navchetan, in spite of her family’s disapproval and the fights with her husband, they had several tense periods and her marriage was really at risk. Anyway Urmila was convinced and she even told to her husband that she would have chosen her work instead of him, because she felt more at home in Navchetan than with her relatives.

Step by step Urmila started to earn money and she managed to send her children to a good school, and when they were at school she didn’t feel guilty to be at work. Thanks to her salary she managed to even finish her studies and to get a degree. She’s now coordinating some families’ meeting for Navchetan and for this reason people recognize her and are thanking her when she walks around in the slum.

Seeing how she is respected among the slum also her family started to accept her work and to respect her, admitting that she made the right choice and that she became a precious resource not only for the family but also for the community.

Such a strong story and witnessing from Urmila for every women around the world who is fighting for her rights!